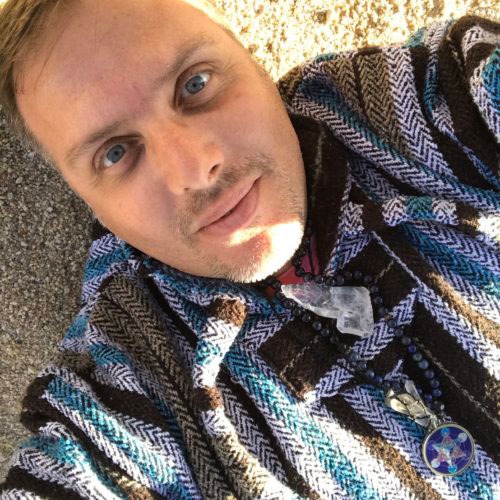 Adrian Vallera, a Los Angeles native, who started his career in the music industry as a concert promoter at the Whisky a Go Go and Roxy Theater on the Sunset strip. He worked with and discovered bands such as Linkin park, Incubus, System of a Down, Papa Roach and Hoobastank, among others. Shortly after, became head of A&R at No Name Worldwide, Elektra records and Sony music.

Adrian Vallera, an avid UFO researcher, truth seeker and spiritual healer, has been practicing the healing arts before he actually begun schooling in his early 20s for massage, aromatherapy, reflexology, acupressure, cranial sacral, ear candling, and many other modalities. In the early 90s Adrian began channeling through Meditation other modalities such as energy and light work as well as crystal healing and activating planetary earth grinds. Along with these modalities, for 24 years he has actively engaged in a 100% plant-based vegan lifestyle.

Always exploring the ethereal realm and healing arts through meditation and conscious living. After a successful career in the music industry, Adrian received a transmission to start the DisclosureFest Foundation, a community and initiative based nonprofit platform whose sole purpose is to bring communities together by raising our vibrational frequency and consciousness.

Through his foundation, he helped bring service to low income communities and mother earth through various impactful initiatives such as: “The Mass Meditation Initiative”, The Clean Air Initiative, The River ‘n Beach Cleanup Initiative, and The Feed our Souls Initiative. Through these highly inspiring drives, thousands of trees were planted, waterways restored, communities educated, thousands of pounds of trash removed from beaches and rivers, and hundreds of homeless brothers and sisters were provided resources, essentials, and healing.

2018 has been a tremendous year for the Foundation, but 2019 is looking even brighter. DisclosureFest is launching a new Initiative, The StarSeed Initiative, a children’s initiative geared towards visiting schools and youth community centers to bring yoga, meditation, sound healing, sustainability, composting and plant-based workshops, higher consciousness education and spirituality conscious activities. We are also starting The DisclosureFest Summer camp where our community children and parents can come and experience an uplifting, fun, well rounded conscious experience.