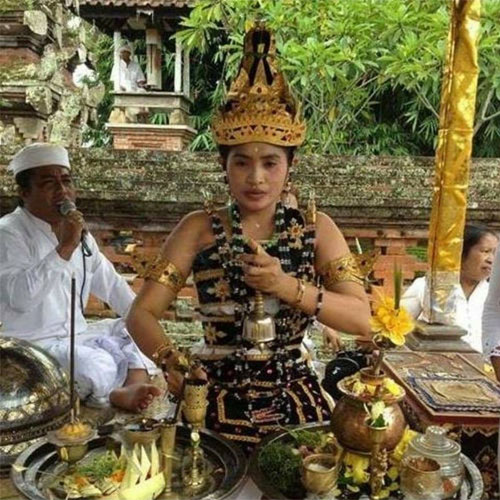 The Melukat is an ancient Balinese water purification ceremony where Ida guides her group of participants through meditation and prayer to bless and energize large vessels of water. She then pours the blessed water over the participants, who then often experience feelings of empowerment, the purification of the emotional body, and the release of negative energy. Ida often closes with a guided meditation and small group discussion or Q&A.

Ida Resi Alit was born to a simple family in a rice farming village in the Bangli region of Bali Indonesia on March 13th, 1986. She spent her youth with a dream of attending university and becoming a successful independent woman, but when her father died a sudden and tragic death when she was 13 years old her family faced increased economic hardship. Despite those challenges Ida still displayed more ambition than the average Balinese teenager. After Ida graduated from high school she traveled to the island of Bintan off of Singapore to find work but had to return home several months later due to her lack of success in obtaining a job. The challenges finding work continued upon her return and unable to find a career or start a family, Ida began to feel lost and depressed. In hope of finding guidance, Ida sought out her great uncle, a Hindu Mongku, who instructed her in the basics of meditation as a way to balance her emotions. After three months of her new daily meditation practice Ida developed a strong connection to a feminine high spirit. During one of these meditations she had an out of body experience where her breathing stopped for many hours earning her the distinction of a “revenant”, or one who has come back from the dead. Upon her awakening she displayed exceptional skills and an intimate knowledge of practices that generally take decades to master along with an ability to speak several ancient languages she had never studied. This significant event led to her accepting her destiny of becoming a High Priestess. It only took Ida another 3 months to pass all of the mandatory trials and tests to become a High Priestess and gain the assent of the Hindu Dharma council leadership, a process that typically takes decades of formal training and about 3 years of testing. On her 21st birthday, the historic and monumental decision was made by the council leadership to bestow the title of High Priestess on her. As a result, Ida is the youngest person ever to be awarded that official title, one of the select few throughout history who has received it without prior formal training, and the only woman to acquire it on her own merit outside of marriage in hundreds of years. For the last 11 years, Ida has served as a prominent leader of the Bangli regency of over 200,000 community members. She has worked closely with other political leaders to help manage the community and conduct large ceremonies for thousands of people at a time. She has also welcomed thousands of visitors from around the world to her Ashram, Gryia Agung Budha Salahin, to receive one of her water purification blessings and join her in meditation or discussion. After 11 years of profound devotion serving her community, Ida now finds herself called into a new endeavor. She is the first high priest or priestess to leave Bali and travel to bring her teachings of compassion, the art of connection, the value of community, oneness, and love with the world. She has already made a number of appearances at major events such as the “World Economic Forum” and has performed ceremonies for audiences across North America with plans to visit Europe, Africa, Asia, and South America by the end of 2019.