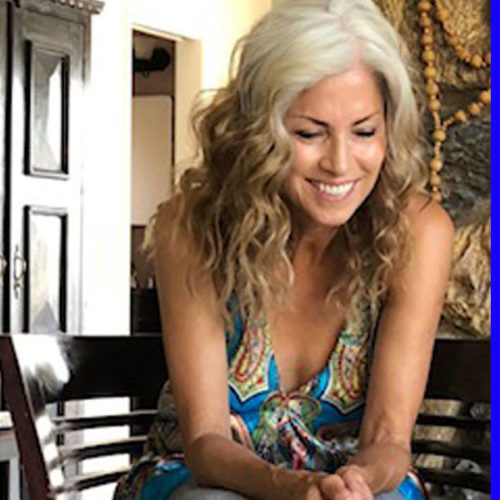 Yoga Groove was created by Karen Russell as a conscious tone and fit barre class which incorporates the yoga philosophy, precise classic barre movements, and choreographed dance sequences. Join Karen as she takes you away from the barre to experience the Yoga Groove workshop as you combine the philosophy of yoga within several sacred dances to inspire you. Since the beginning of time there was the dance!

Karen Russell started her movement career in Erie, Pennsylvania. By the time she was in her early twenties she performed professionally on stage, in feature films, and on television. She has performed with legends such as; Michael Jackson, Madonna, Bette Midler, Kenny Chesney, and Alice Cooper. Karen started her passion for yoga in 1997 while studying Iyengar in NYC, but it was a dance injury in 2000, that guided her to a professional yoga career.

She enhanced her knowledge of yoga while studying with top yoga experts in the United States and abroad. Since 2005, Karen has been an active teacher, producer, community outreach representative, and ambassador for Lululemon. She created the Yoga Groove Studio, and then offered her yoga management skills for Corepower Yoga, Naam Yoga LA, Mandala Center, and Tantris Center for Yogic Science and Retail Store . Enjoy Karen's many educational offerings, such as; the Yoga Groove DVD, Meditation CD, 200 hour Hatha Yoga Teacher Training Course, the ``In the Heart of Yoga`` educational series which was shot in India and her Restorative Yoga Training course. Karen is excited to be part of the Yoga NoHo Center with Michelle Mirkovich building an amazing community to serve others.