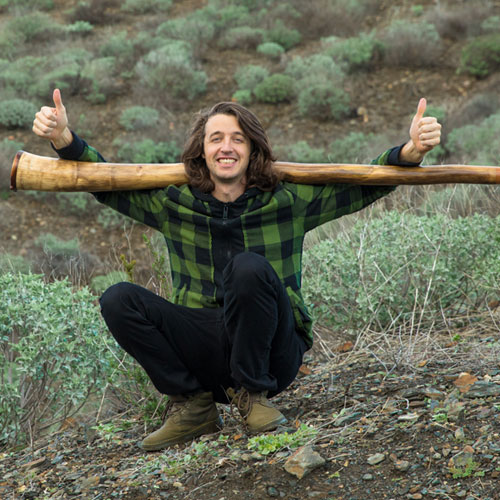 William Thoren is a musician and didgeridoo crafter based out of Los Angeles California. He is best known for inventing the Multidrone didgeridoo and using his personally made instruments to pave the way for a new and original style of playing. Multidrone didgeridoos combine tehniques from the brass world to achieve subsonic drone notes, one octave below the normal drone of a didgeridoo.

William traveled to Australia to learn more about the didgeridoo in 2007. He connected with William Barton, an aboriginal player who is world famous for playing with orchestras. Barton connected him with several other well-known aboriginal players, including Djalu Gurruwiwi. After this life changing trip to Australia, he approached playing and making didgeridoos in the USA with a new vigor.

Through his two brands, WET Didgeridoo and the crafting collective MOB Didgeridoo, William has made several hundred multidrone instruments and sold them to over twenty-five countries worldwide. He has toured internationally as a solo performer and didgeridoo instructor for over ten years. His online instructional videos have generated over 1 million views.